Blockchain is P2P peer to peer send and receive protocol. Originally was forked from how data is transmitted and transferred using the CPU data exchange system, which leads to the coming of its own secured and safe fulfilment with privacy protocol Named (Blockchain).

Blockchain is defined as a digital recording, used to prove that a group of people came to an agreement about something. Blockchain records are permanent and very secure, preventing manipulation. The first example of blockchain technology are the initial records of Bitcoin transactions. 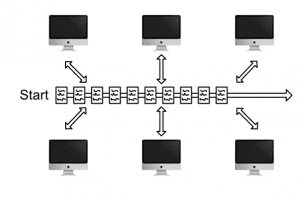 Imagine the blockchain as a book of records. Every page in that book is a block in the blockchain. And every page could record any type of information. Blocks are created one after the other and chained together in sequence.

The blockchain is very unique because it is being simultaneously created and maintained by thousands of individuals all at the same time. In other words, every single person has their own copy and they are all recording, verifying, and updating the data at the same time.

Because blockchains don’t rely on records being kept by any single person or group, its data is very, very secure. In fact, in bitcoin’s history, there is no known instance of anyone creating counterfeit money or falsely manipulating the data.

While bitcoin’s blockchain is the most famous, there are thousands of blockchains in existence. Not all blockchains are created equal.

There are many factors that go into a blockchain’s speed and security. Two of the most important are the technology used and the number of users maintaining it.

Blockchain technology is cloud storage on steroids. Updates are often seen in minutes or even seconds and manipulation is extremely difficult, nearly impossible.

Blockchains can be used to record all sorts of information including digital art and music, medical records, who manufactured a physical product and much more.

If a blockchain’s data is not distributed among many individuals and instead run by one government, organization, group or person, then it is not at a blockchain at all. A system with a central source is simply a database.